From June 20 to August 7, 2022, our season-long exhibit, Down to Earth & Out to Sea,
will feature the work of Wendy Prellwitz and Sue Charles.
​This spring marks Wendy's debut with Alpers Fine Art.
Scroll down to read about her painting career and creative inspirations. 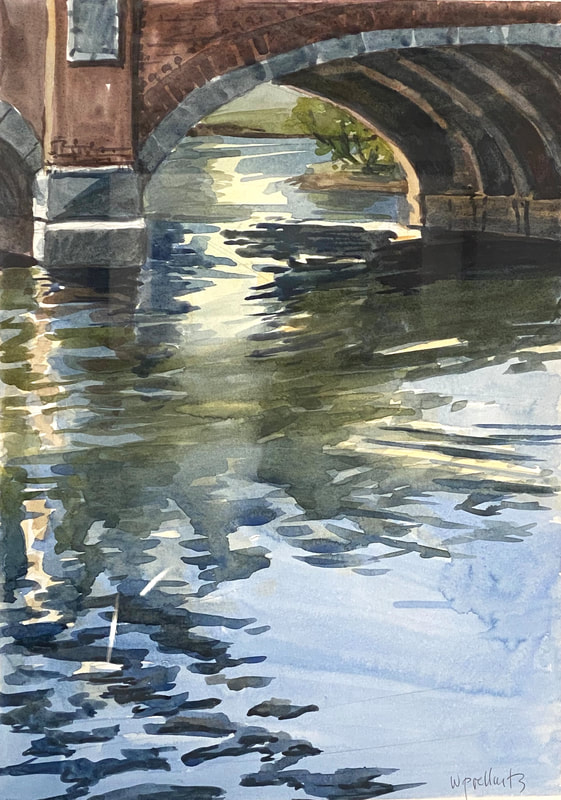 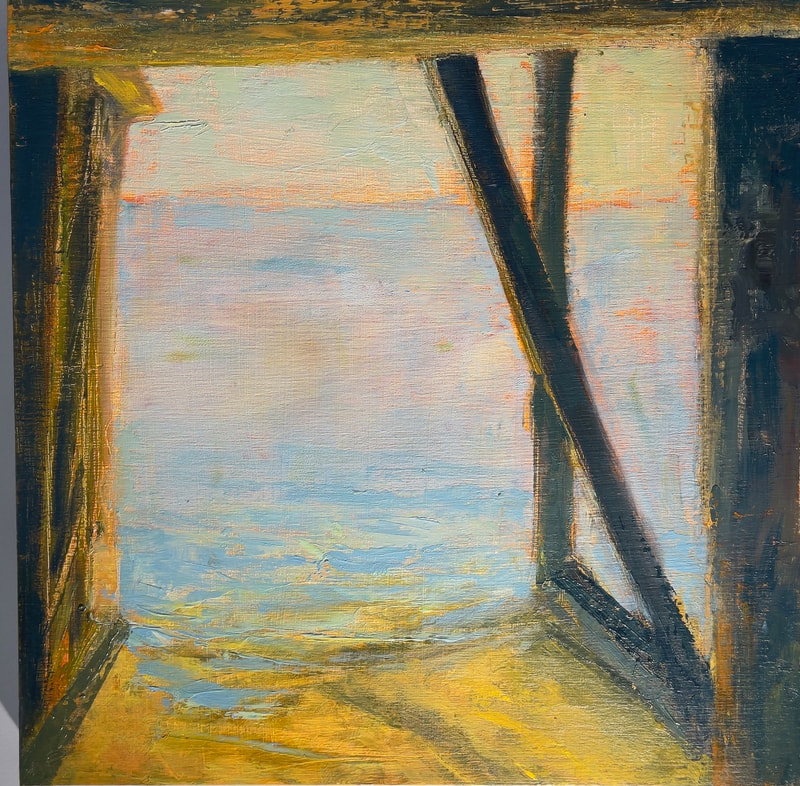 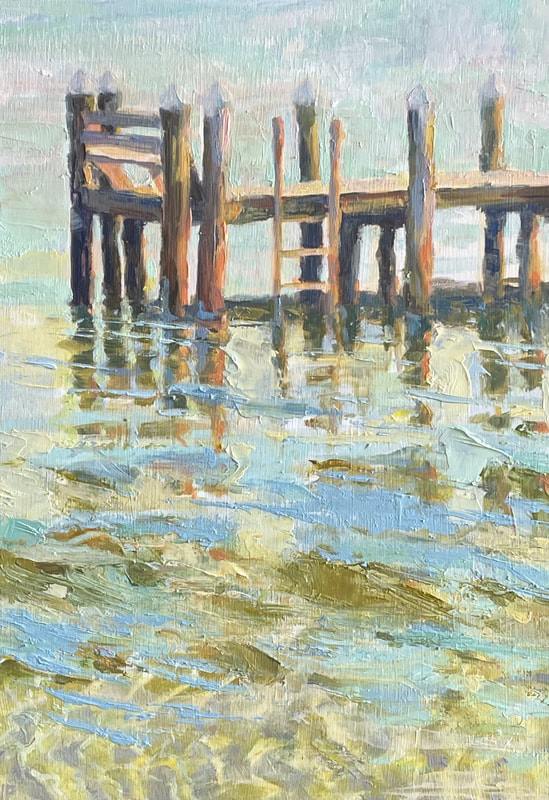 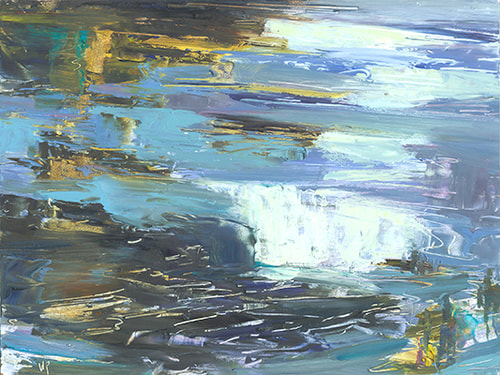 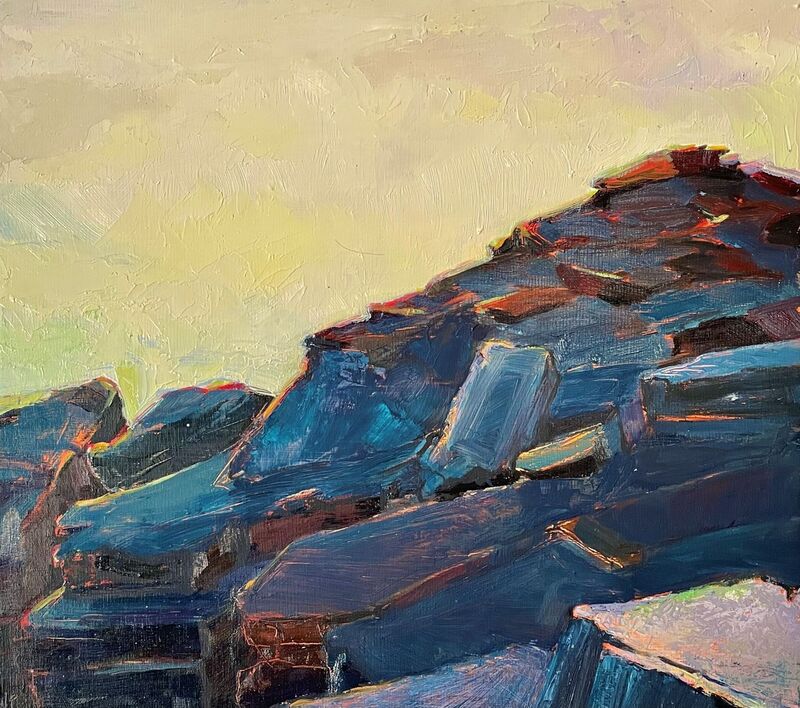 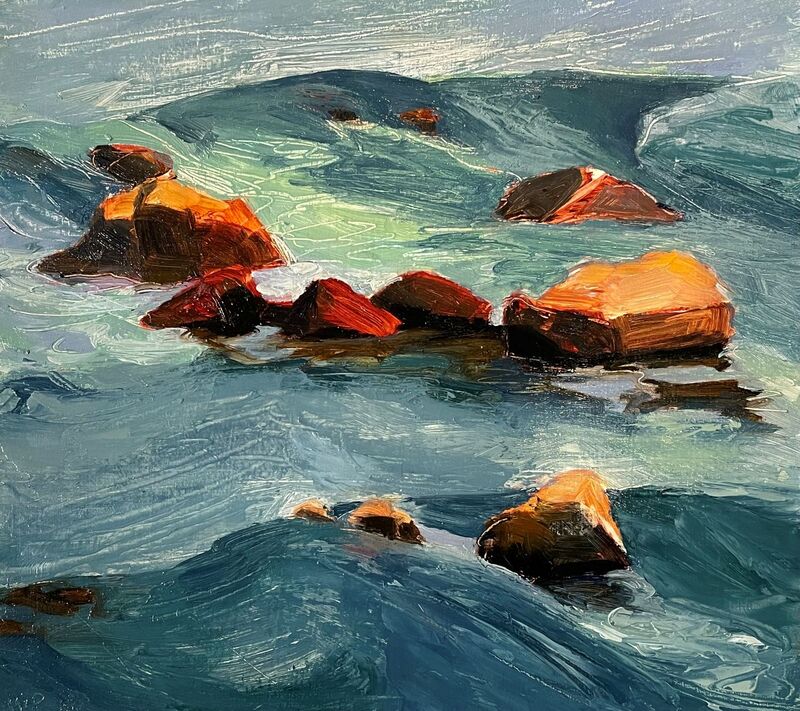 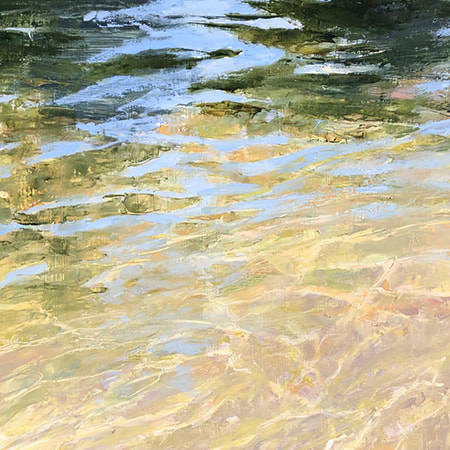 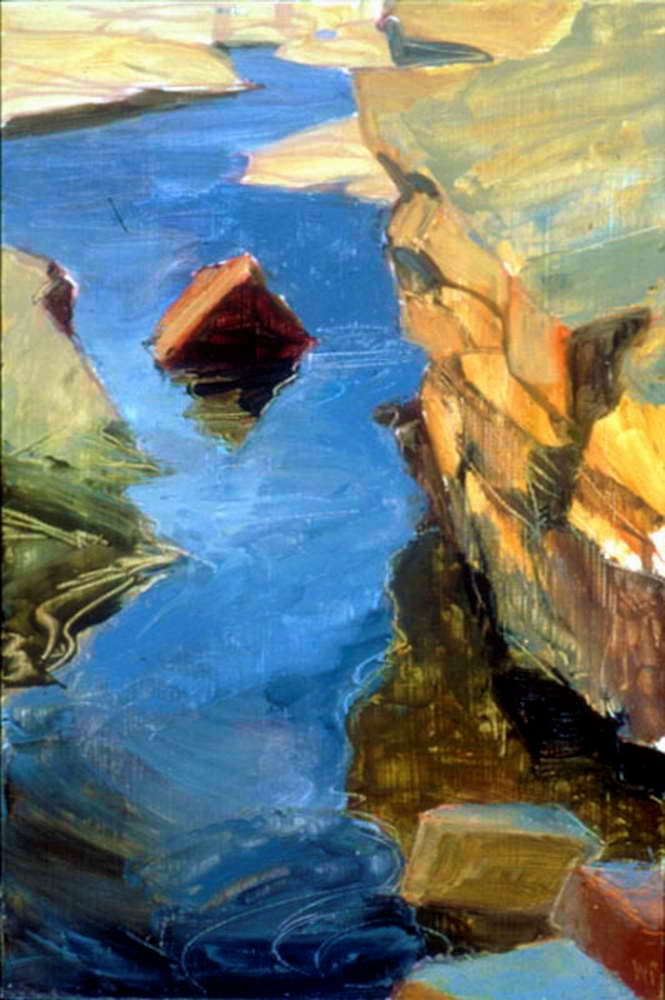 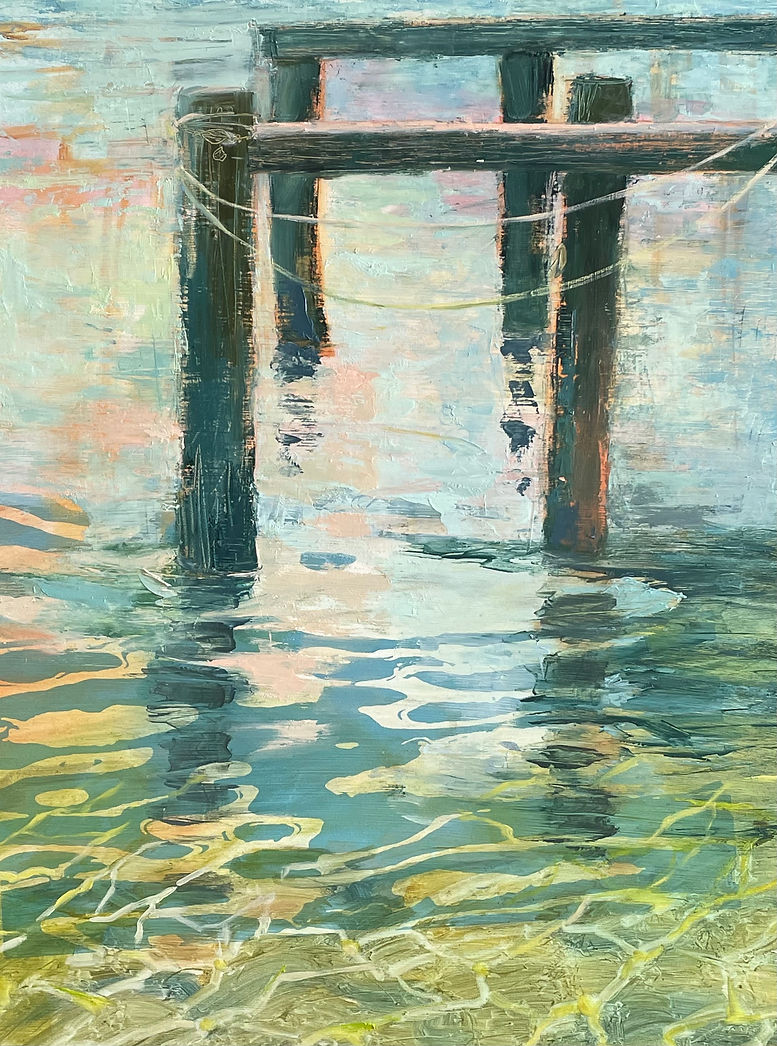 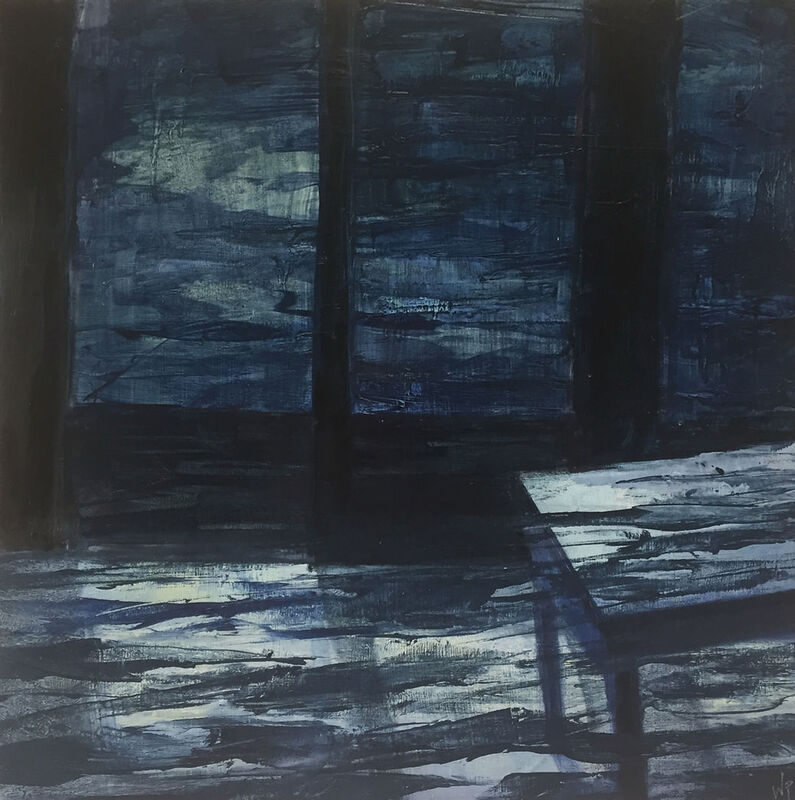 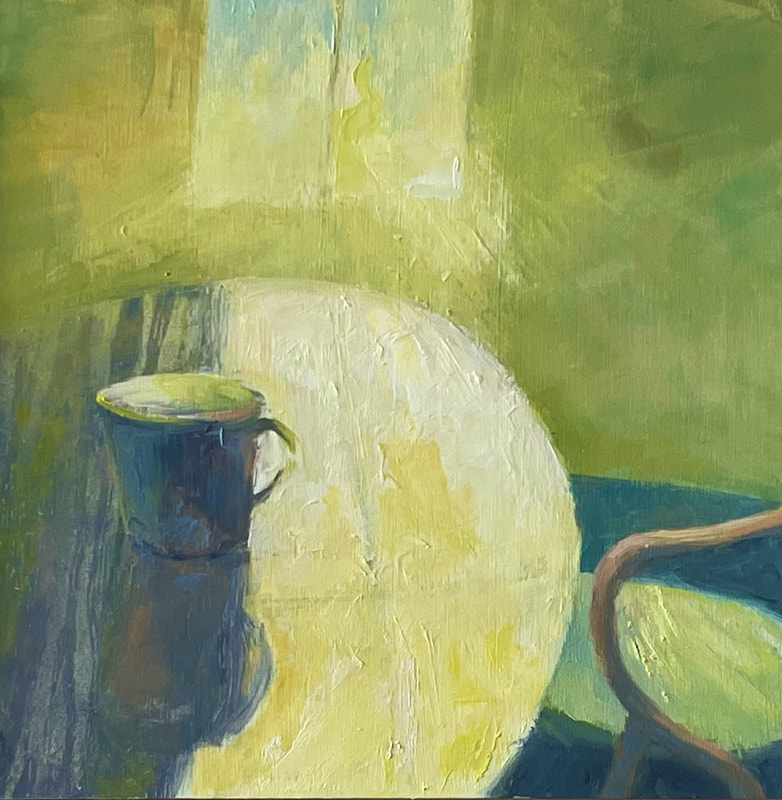 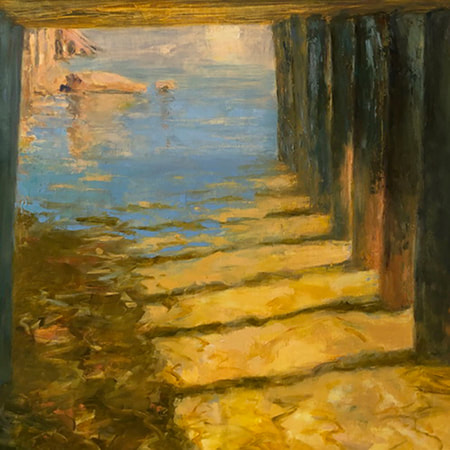 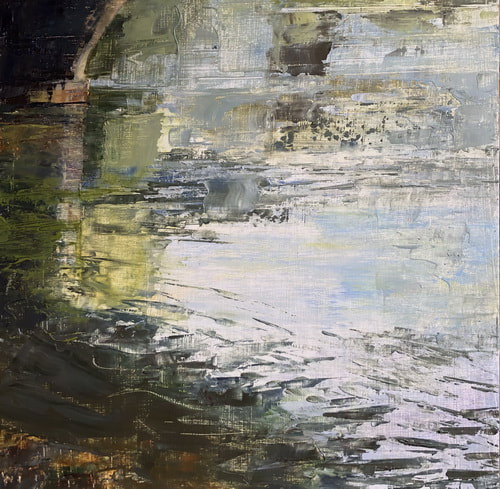 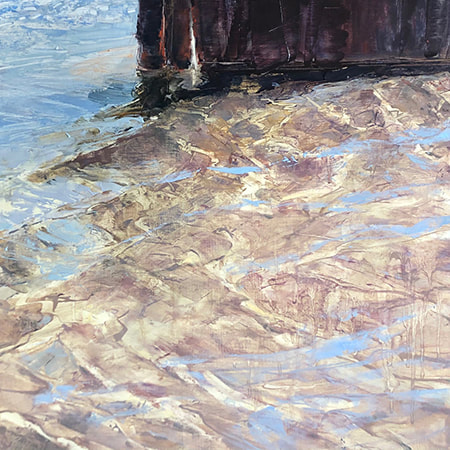 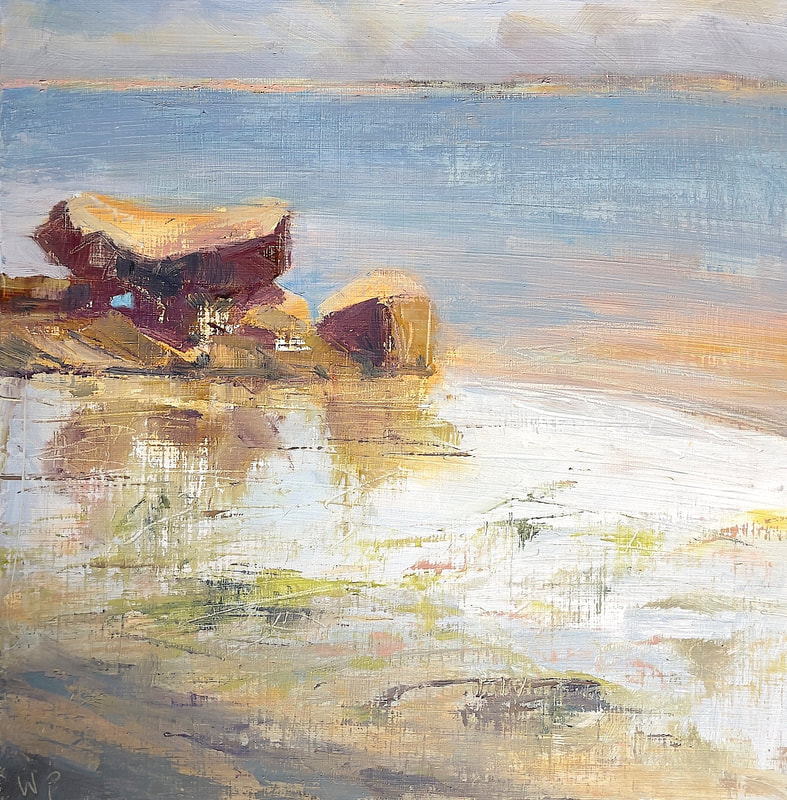 I'm intrigued by the interplay of water’s fluidity with the solidity
of built form, and have been exploring the combination of organic
and graphic imagery.

The work is about the concrete here-and-now juxtaposed with
the numinous-and-unknowable, the tangible-and-intangible.
I'm interested in integrating those dualities, and conveying
a sense of coming and going.

The geometric frames and angled shapes reference structures,
and imply a viewpoint of here vs. there, as well as a diminishing
perspective that directs one’s view out over the water. Much like
one’s instinct to gaze outward, they symbolize a directed view to
the infinite "beyond-ness" of the sea — out of oneself and into
the unknown.

The making of monotypes and paintings influences both of my
practices and arisees from the same impulse — to utilize both direct
and indirect methods of creating marks and applying pigment.
With monotypes, I may begin by rolling an under layer, printing
a pattern or using a ghost that creates unforeseen results when
successive layers are applied. Similarly, I use fluid viscosity marks
rolled over with thicker ink, to open up the process of discovery.

Indirect transfers from other materials also inform my work --
such as wood patterns transferred from rubbings, raised-grain
plywood, planks and carved wood cuts. Recently, I’ve been working
with wood grain to evoke a sense of water movement, which also
references growth patterns and the interconnectedness of things.

Wendy Prellwitz’s abstracted landscapes focus on water imagery and
coastal light — inspired by her lifelong connection to bays, creeks, and
rivers.  Her monotypes, oil paintings, and watercolors reflect her having
grown up with watery views on the North Fork of Long Island, and painting
outdoors along the rocky coasts of Monhegan Island and Ireland.

She received degrees from the Rhode Island School of Design (R.I.S.D.)
and the School of the Museum of Fine Arts, in Boston. She teaches at the
Maud Morgan Visual Arts Center in Cambridge, MA, co-founded her
architectural firm, Prellwitz/Chilinski Associates, in 1980, and lives
​in Cambridge, MA, and Peconic, NY.

Click here to return to the landing page of Down to Earth & Out to Sea. >>>
Powered by